Last week, we wrote about making peanut puffs, a treat from Royce’s childhood. Siu hao jo, or “laughing balls” are another snack traditionally enjoyed around Lunar New Year. These balls are basically sesame fried dough, and are so-named because they split open when fried, which I guess someone decided looked like a laughing mouth. We first made these a few years ago, with a recipe passed along from a friend’s dad, and we were thrilled with how they turned out. It was particularly rewarding, as that year we had experimented with several other treats without much success.

Unfortunately, we were not exceptionally diligent in documenting our first attempt, so when we decided to try these again this year we couldn’t find the original recipe. I asked that same friend for the recipe again, but she wasn’t able to get it to us right away. So, after some googling and a review of various recipes, we attempted the laughing balls on our own. With great expectations based on our first try, we met with complete and total failure. The balls essentially exploded in the deep fryer. So while I wish I could say that our second attempt was just “disappointing”, that might be an understatement as the result wasn’t anything that we could even taste test. (No, I didn’t try to eat the soggy oil crumbs)

A few days later, *the* recipe arrived. Naturally, we had to try again, but this time with proper record-keeping! But first, we had to get it translated. We sent the picture to our family chat (everyone has one of those, right?), but there was some disagreement about the rising agent that was called for. Fortunately, Royce had dim sum plans with his dad the next day, and they called on the owner to help us out. She kindly took Royce’s phone into the kitchen (obviously, he was not allowed to set foot in there to see all of their secrets for himself) to show him what they use for their laughing balls — mystery solved! 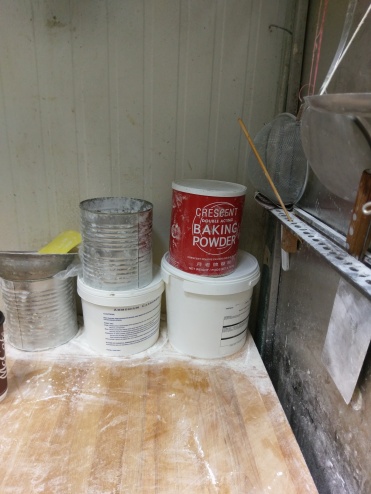 Instructions:
1. Sift flour, baking powder, and salt together.
2. Dissolve sugar in warm water, and mix in egg and lard.
3. Mix dry ingredients into wet ingredients and knead into a dough. The dough should be soft but not too sticky.
4. Cover and place the dough in refrigerator and rest for 30 minutes.
6. Portion the dough into 10g balls.
7. Roll into sesame seeds (you’ll want to make sure these are pressed in very well so they don’t all come off when fried, using a bit of water might help but be sure there isn’t too much going into the frier).
8. In a small sauce pot, heat up oil to about 165C and fry cookies until evenly brown.

*Update* this version is best eaten the day they are made. After a few days they will become very dry. Next year we might try to increase the lard to get a longer shelf life – then again, are these guys really going to last more than a day around the house? 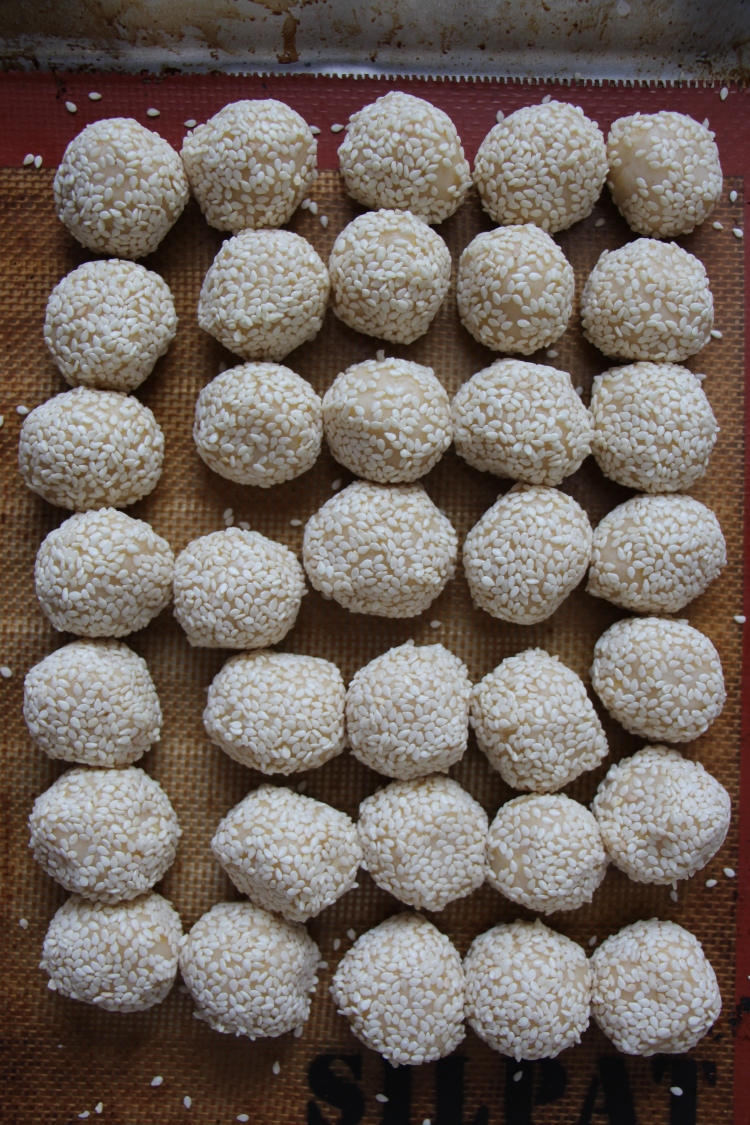 The laughing balls, pictured above are 10 each, and we thought they turned out a bit too big. Next time we try this recipe again, we will scale them to 8g. If they are too big, by the time it reaches a nice golden colour, the inside might not be done. We also had some difficulty getting the sesames to stay with the ball at first, we ended up pressing them firmly and re-rolling them before frying. Other recipes we’ve seen mention wetting the dough with water before rolling it in the sesame seeds.

Maintaining the right temperature is important – both to obtain the right colour, and to ensure the namesake laughing mouths open up when the balls are fried. Try to maintain the oil at about 165C-170C. If too hot, the balls will colour too quickly and so will be dark brown rather than light golden in colour by the time they’re cook.ed If the oil is too cool, the balls will take longer to fry and the final product will be too greasy.

Our house did smell like sesame oil for the next day or so, but well worth it! All in all, another fun and tasty project with the family for the holidays. We hope you’ll have fun giving it a try with your loved ones as well!