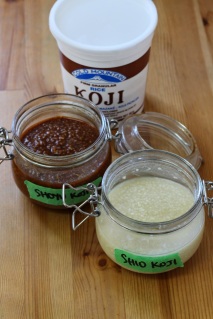 We recently had the good fortune of coming across some rice koji while doing a little bit of supermarket exploring (if you don’t do this, you should!).  I think it’s safe to say that we may be on the verge of a new obsession, but in our defense, here are some reasons why this is totally acceptable:
Now that we have a taste (figuratively and literally) for what it can do, we have our sights set on getting some spores!  Koji-kin are the spores used to inoculate grains, and subsequently produce starters like koji rice.  Once we get our hands on some of that, we can start making koji wheat (and with that — naturally our own shoyu), koji barley, koji-“insert any grain you can think of here”, and experimenting with all kinds of different flavour combinations.